“Man, like all living beings, adapts himself to the conditions in which he lives, and transmits by inheritance his acquired habits. Thus, being born and having lived in bondage, being the descendant of a long line of slaves, man, when he began to think, believed that slavery was an essential condition of life, and liberty seemed to him impossible. In like manner, the workman, forced for centuries to depend upon the goodwill of his employer for work, that is, for bread, and accustomed to see his own life at the disposal of those who possess the land and capital, has ended in believing that it is his master who gives him food, and asks ingenuously how it would be possible to live, if there were no master over him?

In the same way, a man whose limbs had been bound from birth, but who had neverless found out how to hobble about, might attribute to the very bands that bound him his ability to move, while, on the contrary, they would diminish and paralyze the muscular energy of his limbs.

If then we add to the natural effect of habit the education given to him by his master, the parson, the teacher, etc., who are all interested in teaching that the employer and the government are necessary, if we add the judge and the policeman to force those who think differently — and might try to propagate their opinion — to keep silence, we shall understand how the prejudice as to the utility and necessity of masters and governments has become established. Suppose a doctor brought forward a complete theory, with a thousand ably invented illustrations, to persuade the man with bound limbs that, if his limbs were freed, he could not walk, or even live. The man would defend his bands furiously and consider anyone his enemy who tried to tear them off.

Thus, if it is believed that government is necessary and that without government there must be disorder and confusion, it is natural and logical to suppose that anarchy, which signifies absence of government, must also mean absence of order.

Nor is this fact without parallel in the history of words. In those epochs and countries where people have considered government by one man (monarchy) necessary, the word ‘republic’ (that is, the government of many) has been used precisely like ‘anarchy,’ to imply disorder and confusion. Traces of this meaning of the word are still to be found in the popular languages of almost all countries.

When this opinion is changed, and the public are convinced that government is not necessary, but extremely harmful, the word ‘anarchy,’ precisely because it signifies ‘without government,’ will become equal to saying ‘natural order, harmony of needs and interests of all, complete liberty with complete solidarity.’

Therefore, those are wrong who say that anarchists have chosen their name badly, because it is erroneously understood by the masses and leads to a false interpretation. The error does not come from the word, but from the thing. The difficulty which anarchists meet in spreading their views does not depend upon the name they have given themselves, but upon the fact that their conceptions strike at all the inveterate prejudices which people have about the function of government, or ‘the state,’ as it is called.

Before proceeding further, it will be well to explain this last word (the ‘State’) which, in our opinion, is the real cause of much misunderstanding.

Anarchists generally make use if the word ‘State’ to mean all the collection of institutions, political, legislative, judicial, military, financial, etc., by means of which management of their own affairs, the guidance of their personal conduct, and the care of ensuring their own safety are taken from the people and confided to certain individuals, and these, whether by usurpation or delegation, are invested with the right to make laws over and for all, and to constrain the public to respect them, making use of the collective force of the community to this end.

In this case the word ‘State’ means ‘government,’ or, if you like, it is the abstract expression of which government is the personification. Then such expressions as ‘Abolition of the State,’ or ‘Society without the State,’ agree perfectly with the conception which anarchists wish to express of the destruction of every political institution based on authority, and of the constitution of a free and equal society, based upon harmony of interests, and the voluntary contribution of all to the satisfaction of social needs.

However, the word ‘State’ has many other meanings, and among these some that lend themselves to misconstruction, particularly when used among men whose sad social position has not afforded them leisure to become accustomed to the subtle distinction of scientific language, or, still worse, when adopted treacherously by adversaries, who are interested in confounding the sense, or do not wish to comprehend it. Thus the word ‘State’ is often used to indicate any given society, or collection of human beings, united on a given territory and constituting what is called a ‘social unit,’ independently of the way in which the members of the said body are grouped, or of the relations existing between them. ‘State’ is used also simply as a synonym for ‘society.’ Owning to these meanings of the word, our adversaries believe, or rather profess to believe, that anarchists wish to abolish every social relation and all collective work, and to reduce man to a condition of isolation, that is, to a state worse than savagery.

By ‘State’ again is meant only the supreme administration of a country, the central power, as distinct from provincial or communal power, and therefore others think that anarchists wish merely for a territorial decentralization, leaving the principle of government intact, and thus confounding anarchy with cantonical or communal government.

Finally, ‘State’ signifies ‘condition, mode of living, the order of social life,’ etc., and therefore we say, for example, that it is necessary to change the economic state of the working classes, or that the anarchical State is the only State founded on the principles of solidarity, and other similar phrases. So that if we say also in another sense that we wish to abolish the State, we may at once appear absurd or contradictory.

For these reasons, we believe that it would be better to use the expression ‘abolition of the State’ as little as possible, and to substitute for it another, clearer, and more concrete –‘abolition of government.'” 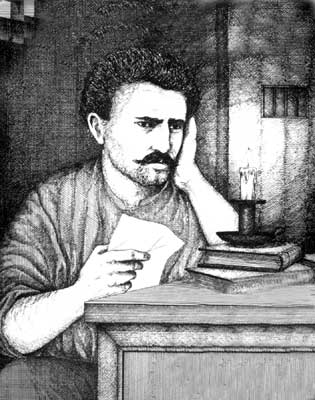